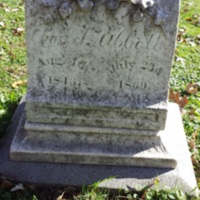 Mr. Charles L. Abbot, manager of the Linden Mines, is lying dangerously ill at the residence of Mr.T. J. Campbell in this city. Mr. Abbott is a comparative stranger here, which makes his illness appear particularly sad. His parents at Boston, have been telegraphed to. P.S. Since the above was put in type Mr. Abbott has ceased to live. Mineral Point Tribune July 24, 1869